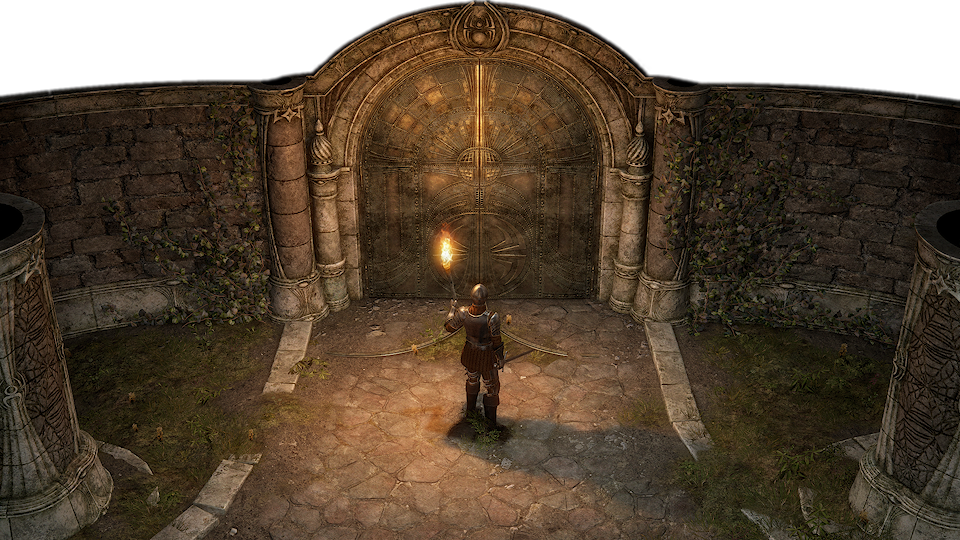 Two new levels have been added to the game, featuring all new content, and also music. With these maps we've pushed for a new level of quality, detail and variety, taking advantage of new engine features and development tools. The first 3 levels of the game have also undergone extensive changes and improvements, an updated tileset and a lot of all new exclusive items.

Over 130 new items have been added across the game, including new item types like bevors and hats. We've also remastered or replaced many assets to better fit the game's current level of quality and aesthetics. 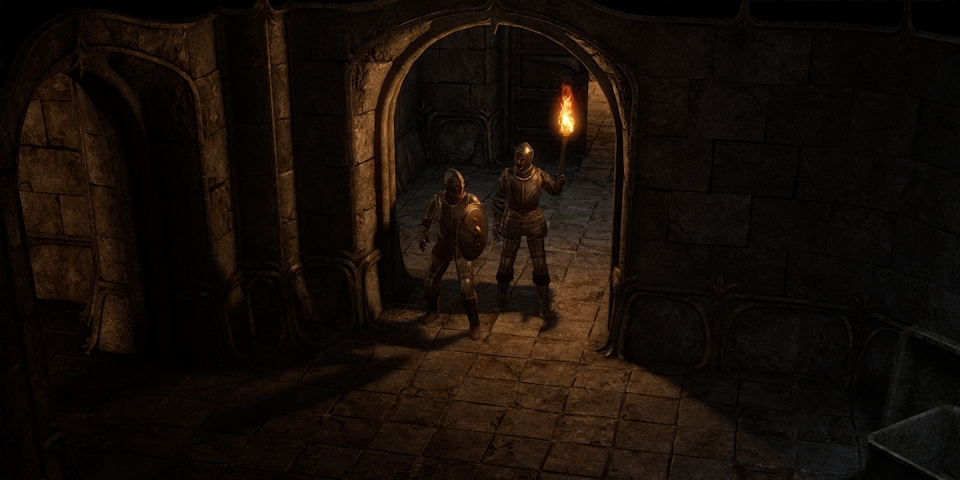 In this update you can meet your first potential long term ally. This provides a whole new dynamic and a fresh way to experience the game.

This was an important first step for the NPC interactions to come. With Exanima's inherent complexity, creating a competent companion was not simple. He is an asset to any player, and we will continue to make companions smarter and more self-sufficient until they feel almost like equals. We will expand on possible interactions, and importantly dialogue, which we can also use to better expose the story and lore.

Your companion will gain experience and learn new skills, much as you do. They will also learn to fight better, become more confident and undergo some other changes in their character.

Dialogue makes a first appearance in this update. We are still only using dialogue in a basic capacity, but it will soon become a much more prominent and important feature in the game.

Our goal with dialogue is something fully real-time and interactive. It is not a separate mode of interaction, but a part of it. You can talk while performing any action. Dialogue can have practical applications, you can point at something or someone, even while walking, and say something relevant. Tactical applications during combat can also be part of the same dialogue system. People can randomly witness the conversations of others, and perhaps join in, or simply learn something. There are countless applications, it is an implicit part of the world and how you interact with it.

You may have noticed that Exanima's world has been suspiciously flat. Our characters have not been good at moving or keeping their balance otherwise, and when characters lost balance they'd flop like a sack of potatoes.

This is no longer the case. The "balancer" is what has allowed characters make dynamic movements in combat and stay upright. This was overhauled to deal with more difficult ground, such as stairs or rocky slopes, and it is now active all the time, not just in combat. This new balancer does more than just upright movement, it functions even when tumbling or cartwheeling through the air, allowing characters to control more motions and regain their footing dynamically. Characters can now trip, slip, jump off ledges and generally deal with loss of balance without just falling over and resetting. Character can also recover quicker depending on the severity of the fall.

With this come various improvements to movement both in and out combat. In combat movement is now faster and also more responsive, allowing characters to quickly move in new directions without having to shuffle their feet as much.

Since we began our journey to make a game, our most ambitious goals have been with AI. What we're trying to do, as much as possible, is that if you imagine an approach to a situation, or a way you can modify or prevent an outctome, you probably can. For example, say you were promised a reward, but rather than complete the task, you decide to find out where the reward is stored and steal it. Something like this would not normally be possible, and so called "AI" is notoriously bad if you veer off the scripted path.

There is much more we want in terms of dynamic interactions with AI, but we've been focused on core gameplay features, and have neglected huge aspects of the game, for too long. In order to complete Exanima's story and content, we had to introduce major new features, like intelligent friendly NPCs, dialogue and mind thaumaturgy. If we tried to build these features without the proper foundations we'd ultimately get nowhere. We've now taken the time (perhaps too long!) to completely rebuild every aspect of our AI.

We want all our AI encounters to appear like living, thinking beings, not mindless drones that blindly perform a specific task. They are driven by emotions and other states of mind, they have varying personalities, they remember interactions with others and form relationships, they have social and non selfish behaviours.

You might startle someone unexpectedly and cause them to become scared or agitated, but they may calm and reassess the situation. They might defend themselves, but not wish to harm their attacker and behave accordingly. They can understand a stranger fighting in their defence, and may be grateful. They might act to defend someone they care about. They can even, potentially, form social groups among themselves. These are some simple examples of things that are not predefined game mechanics, but that occur organically as part of the simulation. Players and NPCs are treated in the same exact way, based on observable behaviour alone. There is no cheating, no making decisions based on things they shouldn't know.

This is basically our artificial brain, emotions, memory, decision making, impulsive behaviour. But what of more structured and complex tasks? If we were to now simply override it with strictly scripted behaviours, it would become irrelevant.

As soon as you tell NPCs to behave in a certain way and also give the player freedom to act as they please, things can start to go very wrong. It is a very difficult problem, and the less restrictions you place on the player, and the mechanics of the game world, the more difficult it becomes. Player and mechanical freedom are at the core of our design philosophy, we have spent years devising a solution to these problems, a solution we call the "role system".

"Roles" are basically collections of traits and behaviours. They can be specific and character defining, such as "King of Ardent" or very situational such as "person crossing bridge", they can also be relational, such as "friend" or "customer". They can be real or assumed, they can influence personalities, spread information, reputations and conflicts, and model various real world behavioural effects. Single characters have many roles assigned at once, they come and go, change and evolve.

There is a lot of complexity behind how roles function and interact, but the core concept is that we can keep building our library of roles, to expand on how characters can behave, adapt to situations, perceive and relate to eachother, and use the same tools and systems to also define more specific behaviours, without locking characters into situationally inappropriate ones.

This will be a long journey, but is essentially now a matter of content. Already now the role system is modelling all our behaviour, and we have the means and tools to keep building more.

Still falling under the AI umbrella, we felt it was time to address other things too. Combat AI as been completely rebuilt, it is more varied and much more tactical, allowing the most skilled AI to keep experienced players on their toes and not just fall into simple but effective patterns. It can be proficient with different fighting styles and weapons, and it is much more careful about accidentally hitting allies. Pathfinding has also been updated to negotiate more complex environments, avoid moving objects and more.

These are all complex systems, and all fresh from the production line. It will no doubt take us some time to iron out the kinks and especially to actually take advantage of new features. But we now have a true solid foundation, and an array of tools at our disposal to create better and more interesting AI.

Reworked and improved first 3 levels of the game

It is no longer possible to defend with depleted stamina

Many specific animation improvements for all character types

Fixed characters simply giving up when suspended over a high drop

Fixed vsync not working correctly on some systems

Fixed not being able to switch weapons while under attack

When an arena fighter ranks up, the previously highest loadout is copied

Short spears can now be used one handed

Many more fixes and small improvements

MORE ON THE WAY

We're going to be rapidly adding to what these new features bring to the game, but we didn't want to keep you waiting any longer. We've got a lot more lined for upcoming updates too.